Why the new Facebook “Endorse” Model Works for Me

Posted on November 6, 2007 by Roxanne Darling

Today Facebook announced that it will allow companies to create profiles inside the social networking website. Individual users can then endorse or be “fan” of said company. Just like Facebook, independent media producers can serve as a very valuable filter for their audiences when it comes to products and services. In more crass terms, stop being ashamed of having corporate sponsorship, and duh, don’t take on any sponsors whom you do not trust or support yourself. Business ethics 101. People like Chris Brogan are happy to call you out when you use the tools effectively. 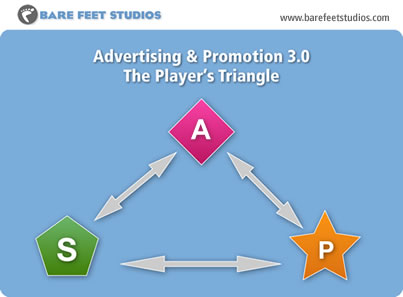 What we are really enabling now is a whole new self-sustaining system whereby people who make stuff (P-producers/plafroms) attract people who like that stuff (A-audience) and can be supported by companies who want to tell us about their stuff (S-sponsors/advertisers). I presented this Player’s Triangle concept at the Podcast & New Media Expo this past September and I think it is an incredibly efficient way of connecting people and building businesses. 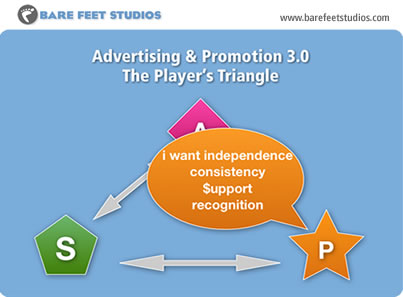 The independent producer – be it Facebook or Meredith Medland of Living Green Podcast – gets the party started. The platform/show both have natural filtering mechanisms built in. They are built of networks of people who have organized themselves based on shared interests not irrelevant data like geography or age. 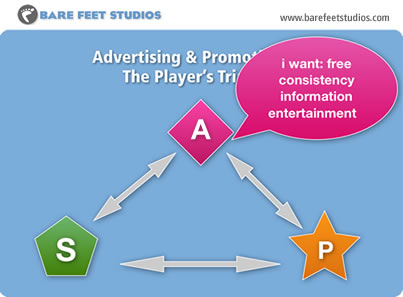 Audiences are very tired of being sold to every waking moment, and I have written before how advertising is broken. Nonetheless, they still want to connect, to be entertained, to be informed. The platforms and the independent producers are doing that, while traditional media struggles to find a place in this new world. The internet has also trained people to want things for free. I think this is partly because that was how early internet companies competed against each other and because it is relatively cheap to built an internet business. Not so easy to sustain one though. 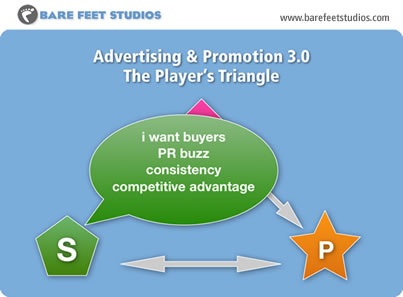 And that is where commercial sponsors come into play. They have the budget and the desire to reach new customers. They have been trained to think a 2M audience is better than a 20K one, but that was before targeted audiences. The Long Tail as Chris Anderson elucidated, is about this revolution where meaningful and profitable transactions are taking place directly, without the radio or TV station required.

How long will it take until we never have to get an un-targeted or mass-mailed advertisement again? Well, a few generations probably, but this is a start. Who wants to be the first company to stop using mass marketing tactics and instead commit to only targeted message delivery?

I think of it as an organic circle of commerce. We find each other by shared interests and not by accident in the thousands of messages blast at us daily. I can hear the quiet coming already. And I love how this supports people like us who are creating a first-class internet TV programs that our viewers want to be free.

← How to Create a Website Using iWeb
SmallBiz America Relaunched →