Posted on September 7, 2008 by Roxanne Darling 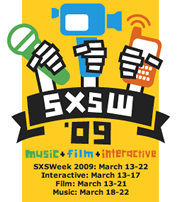 I’ve been trying to help our regional SXSW coordinator, Phil Tripp, get the word out about this. SXSW is the leading annual conference in Austin, TX for music, film, and internet interactive. They are doing special outreach to get more representation for Hawaii creatives, and people this is a great chance!

He is hosting a free event on Monday, September 8, 6 pm, at Sam Choy’s on Nimitz. Leave me a comment if you want to get in touch with Phil directly.

Here are some highlights from his recent email:

HAWAIIAN ARTIST SUBMISSIONS TO SHOWCASE– From now until October 25, we seek contemporary music artists who can submit their music and materials via Sonicbids or directly online at https://www.sxsw.com/music to be considered for a one hour showcase and also additional shows such as parties and private events. The best music styles are rock, pop and indie, but we are also looking at slack key and traditional contemporary Hawaiian from unique artists.

HAWAIIAN WEBSITES FOR AWARDS–From now until December 19 Deadline. For web artists, developers and designers, there are over 20 categories to compete in for the SxSW Web Awards at https://www.sxsw.com/interactive.

Shane and I plan to attend SXSW so even if you can’t attend the meeting leave a comment so we can connect with you about this event. Last year I was invited to speak at the last minute (literally – 15 minutes before with a text message via Twitter) on the Utterz panel with Chris Heuer, Chris Brogan, and Jeremiah Owyang. You never know what might happen in Austin!

← How To Create a Conference Badge Page
Yammer asks: What’s Happening at Your Company? →