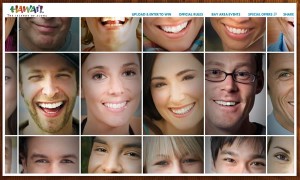 I recently read in the Pacific Business News about the HVCB (Hawaii Convention & Visitors Bureau) Hawaii: A Thousand Reasons to Smile Campaign. It’s targeted at residents of San Francisco, who are frequent visitors here. I support the idea of reaching out to San Francisco residents – I have many friends there including Chris Heuer, Kristie Wells, Stowe Boyd, Susan Bratton, and Elyse Tager along with Charlene Li, Scott Simpson and Jeremiah Owyang, many of whom love Hawaii and come here wanting to meet the locals. They are generally smart, friendly, successful people who are used to spending money.

However, may I politely suggest that the way to attract them is NOT with a last century web site built on a 100% flash interface that loads s-l-o-w-l-y and is very controlling in its navigation schema, restricting how the user can (not) truly explore where s/he wants to go?

I would have liked to point this campaign to my San Francisco friends, who also happen to be active web users, who themselves have a large “following” via blogs, social networks, Twitter, et al. As it is, there are too many “last century” flags on this campaign, so instead, I am using it as a learning opportunity. GoHawaii/HVCB will get attention in any case!

Together, just those few friends mentioned above have over 75,000 followers on Twitter. Even if you don’t know about Twitter, this translates as follows: These people carry influence and are well known in the smart, hip, savvy circles of San Francisco. Exactly the kind of people this campaign wants.

There are also many people who live here and have friends all over, and who are also active on the social web like Neenz, Arleen Anderson, Angela Keen, Vernon Brown, and Ryan Ozawa.

This is a collective of natural communicators with large networks who represent a missed opportunity on this campaign because it does not take advantage of social media tools and practices. Instead, HVCB reached out to mostly newspaper editors and a few paid bloggers. Pardon me, aren’t newspapers, including the San Francisco Chronicle, going out of business on a daily basis? I don’t mean to suggest either/or – new media or old media – they both can play. I do mean to suggest that this campaign is completely unfriendly to social media influencers. I do understand it is natural and easier to do what you know, however, that is no longer a viable or responsible option, whether using taxpayer or stockholder monies or not.

Now take a look at the smiles picture above. It is not clear to me if these people are “real” people. I assume they are models, as they so closely resemble stock photos and because the associated photos such as “watching a cliff diver” also appear to be stock. I might as well add, as I suspect a commenter will mention it anyway, this collection of perfect smiles with special lighting looks more like an ad for dental work than an invitation to Hawaii.

The San Francisco Bay Area is home to the Cluetrain Manifesto and the now decade-long march toward transparency in communication and marketing. Hawaii tourism officials would do well to read the book. I have several copies and would be delighted to loan them out to anyone who is interested. It is also available online for free. Email me.

Faking things up is not part of the mindset with the smart and savvy in San Francisco. Instead think living green, being politically and socially active, being at leading edge of technology, and setting the pace for change in almost every aspect of life today.

Having a Contest v1.0

There is a contest to upload a picture of oneself smiling, for a chance to win four nights hotel in Maui and 80,000 miles on Hawaiian Air. (Pay your own taxes, fees, and whatevahs.) The contest rules page is very last century. The judges are not disclosed; the photos are not posted anywhere. It is all happening behind closed doors.

Why have secret judges when you can have the community on the internet get engaged, give you more page views, and do the judging for you? Compare this to the Queensland Department of Tourism, who created the World’s Greatest Job contest. Mind you, I still don’t like the slow and user-unfriendly flash interface as I have yet to find a way to re-locate or link to some of my favorite video submissions. But the concept and most of the execution is fantastic, and remarkably similar to an idea I had last year. 34,000 people submitted 1-minute videos from all over the world. They got buzz from all spheres of web users – geeks as well as tourists, news organizations and justified critics.

They are using the internet to talk to people who live, work, and play on the internet, and they willingly embraced the communication practices of the modern internet: transparency, simplicity (look at their rules/submission page), play nice with others, and embrace peer-to-peer power among a few. Sadly, GoHawaii and HVCB are using the internet as it existed 5-10 years ago. It doesn’t make us look as smart as we can be.

Why Are The Events So Un-Promote-Able??? 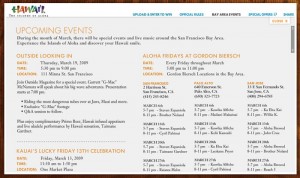 Back to the Smiles Campaign. The Music Events Are Very Cool: they (we, from taxpayer money) are sending local musicians to play at Gordon Biersch locations in the Bay Area and I am thrilled my friend Mailani Makainai is among them. This is in itself a great gig for promoting Hawaiian music, something very dear to my heart for years!

But why is all the info stuffed into a flash file – not indexable by search engines or easily bookmarked much less read by humans? The page is also not printable and the scroll bar is hard to see. Why is this not on a blog with linkable pages, ratings, comments, Twitter postings, etc? Why is there not a Flickr group collecting photos of the musicians teaching folks how to shaka at all of these locations, getting cross-posted to Facebook, Twitpic, etc?

Nathan Kam is doing his best (and rocking his personal brand!) by posting photos of the (old school) San Francisco campaign launch on his personal account when this could and should be rolled under a more strategized web asset for the campaign IMO. Nathan – I love you and hope this post gets you more support as you are one of the precious few trying to learn and implement social media practices. Big {{hugs}} to you for going above and beyond to take, post, and tag the photos of the reception!

Why is there no tag so people can talk about this event using internet shorthand, and so search engines can aggregate all of the related content? If they had used the social web instead of a 4 flash pages, the HVCB could actually measure the effectiveness of the campaign not to mention generating incredible Google juice – done mostly for free by other people! 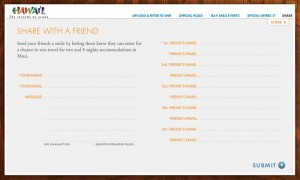 Just when I was about to give up hope, I decided to click the Share link, hoping to see links to my favorite social networks! Alas, it was just an email form with no mention of privacy or if those friends’ email addresses I might share go into a tourism database to be spammed from here to eternity. Do they? I hope not; in any case I won’t risk it. “Share” these days means using web plug-ins to tell your friends on Facebook, Digg, Yahoo Buzz or save to your own Delicious bookmarks! For people like me who like to share, these tools are much easier, faster, fun, and effective than trying to remember people’s email addresses and type them into a form, without their permission.

Even the URL is dated:

https://www.thousandreasonstosmile.com/?cid=09SFBlitz_pr
Question mark URL’s are not search-friendly and the name of this is “09 SF Blitz PR” – just another run of the mill PR campaign. The average web user may not look at URL’s, but the above average techies in San Francisco will do so at a much higher rate, I can assure you. HVCB owns the domain – why not put the site there? You can still link to anywhere you want from the flash pages.

I wonder if this blog post will offend some, and they will not speak up as is local custom. I would prefer you do speak up, and help me understand the logic behind this campaign – or at least let’s start a discussion here or at another location. I write this because I so love this land of Hawaii. I write this because I see tourism as an oportunity to improve relationships within our state and with our visitors. I’ve been told by a select few tourism officials that I care more about the state than those paid hundreds of thousands of dollars to do so. I write this because I find it so frustrating that our tourism, advertising, and PR leaders are still doing things in such old-fashioned, expensive, boring, and ineffective ways. There is opportunity all around us; we started the discussions at Podcamp + Wordcamp Hawaii, but I am impatient.

Please visit this web site, A Thousand Reasons to Smile. Compared to the SF Blitz PR, which one draws you in more? To some it is just plain old user-generated content but it speaks to me far more than GoHawaii’s polished, pretty, perfect, no-one-home, old-attempt-at-selling-the-fantasy Hawaii site. BTW, this blog came up #1 in a Google search for “A Thousand Reasons to Smile.” That is the name of the Hawaii campaign.

Hawaii, my darling, it is time to let go of controlling every aspect of the message. It is time to put behind the pretty flash sites in favor of messier and livelier blogs and social networks. It is time to bring new blood into your agencies. Your friends can stay, but they are not keeping up with the times. We can teach them – who wants to learn?

I have been giving free talks on this stuff since early 2005. I decided it’s time someone spoke up and mentioned that we, together, can do a much better job of spreading Aloha, of telling the world about these beautiful and imperfect islands in the piko of the planet. I hope you will tell me what you think!