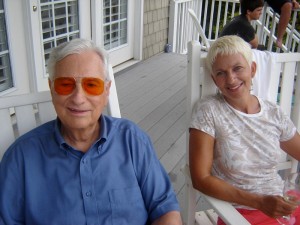 Two weeks ago my father died.

Like many people, his stature or what we call personal brand, has improved since he passed away. That is an interesting topic to me – however suffice it to say that I think it is evidence of the predominance of goodness and optimism in humanity at large. We do have an enormous capacity to “let bygones be gone” and death actually seems to facilitate that.

Social media is a powerful, conscious tonic as well. Shane and I watched a breath-giving episode of pouringdown.tv by Daniel Liss last night, as I was mulling over what to say in this post. He too is moving forward from the stereotype of grief that has no place to go and has instead given it a home on the web. As art. As feeling. As voice. Unscripted. Just here. Now.

Shane and I created a web site for my dad, a really simple WordPress blog site, because they are easy to get up and manage, and people can begin interacting with it instantly. The site itself did not need any thing special because the photos and video of him, along with the comments and stories being contributed by his friends and family, have performed the near effortless task of bringing the man and the site to life.

It is a co-incidence that he worked in marketing and advertising. Frequent readers of this blog know I can be a bit hard on those professions, as I was on my Dad, because I am a lover of people, of truth, of respect, and authenticity. So really it makes sense that rather than me trying to tell the world about him (when in fact I went several years being out of touch), that instead I let others who knew him, define him as a man, and as a brand.

I have discovered parts if my dad I never knew. I have channeled sadness at losing his physical presence into my keyboard, being given back times ten by the site comments and dozens of private emails. I am making them all into a printed notebook for my mom to cherish. Did I say this was nearly effortless?

I am lucky because he was such an inspiring person. In being remembered, even colleagues with whom he clashed (seriously at times, for long periods of time) have come back and chosen to highlight the good times. I am lucky too because as a dad, with four daughters, he also knew how to be mean, too strict, and unforgiving to boyfriends and sometimes even husbands. I know he was willing to speak truth to power on the job, and at times paid heavily for that. But this site is a celebration of life, and being older, I understand the rubegeld – the gold of learning – that is reaped from life’s difficult moments.

He now has a resting place on the web. His legacy is defined in part by the page of facts we listed about him, but that page is dwarfed by the comments and stories. You can meet him and spend some time with him here: williampbenton.com.

How Easy Was This?

The social web offered a space. The people came and shared. The brand lives on. My work is done. I hope you are enjoying it Dad!