Thinking About Having Your Own TV Show? 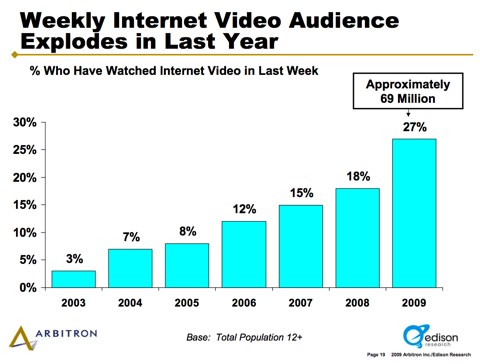 I sometimes chide my business audiences when I am speaking from the podium with this question:
“Now, why don’t you have your own internet TV show/channel?” When you consider that only a few years ago it was impossible for anyone except the big media outlets to broadcast video content, and now you and I can do it for almost nothing, it is quite mind-boggling. Of course, that is why so few have jumped on board – and why the opportunity for those who do is quite extraordinary.

If you are a “solo-preneur” aka one person band, you can easily have a talking head show filmed from your desktop. If you are a larger company, you have tremendous assets at your fingertips, not to mention stories to be told, brands to be built, and customers to be educated and entertained.

Here is some newly released data to continue the discussion:

From Podcasting News: Internet Video Platform to grow 400% in 4 years

Worldwide shipments of devices that support Internet video consumption will nearly quintuple by 2013, according to electronics industry analysts iSuppli, spurred by an increase in consumers’ broadband Internet access.

Edison Research has been studying the internet podcasting phenomenon (this applies to audio and video content), and their data have demonstrated continuous growth. (See bar chart above.)

Consumers Expect to Find Their Content Online
• Broadband access is now the norm, and weekly online audio and online video usage have reached critical mass
• Media not meeting consumer expectations will suffer as their brand-loyal users will find other options far more easily

If you think online video is not applicable for traditional brands, consider that CBS News today has launched a live stream channel on uStream, and the traditional health care company, Johnson & Johnson, has had a YouTube channel for over a year. Thanks again to Rob Halpert for being a guest speaker at Podcamp Hawaii. And for you audio and/or CSI fans, the F.B.I. has several audio podcasts. That’s the official Federal Bureau of Investigation – not the guys “From Big Island” as reads a popular t-shirt here in Hawaiʻi.