Hawaii Officially Dips Toes in the Waters of Social Media 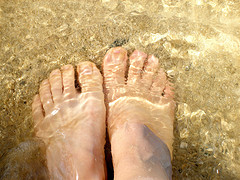 Many thanks to the Pacific Business News and the Star Bulletin for covering the recent So Much More Hawaii fam tour with mainland bloggers. I started this writing as a comment on PBN, but I have a rule that when my comments exceed two paragraphs, I move the conversation over to my blog for clarity and for support. (Plus, the Star Bulletin did not allow comments on Ms. Schaefer’s article and PBN does not allow links in their comments – both of which limit the conversation and tend to make me a little grumpy.) As I understand it, this blogger trip is not the first time Hawaii tourism has paid for blogger fam trips – though it is the first official blogger tour and significant campaign of which I am aware. Paying people to come here and write about us has its own issues that I addressed here and here.

Measuring Social Media Campaigns
I agree with Derek (a commenter on PBN) on the point that internet-based marketing campaigns *can be* far more measurable (and accurate and targeted) than traditional print, radio, and tv-based initiatives. He was responding to this item in the PBN article:

It is difficult to measure the effectiveness of online marketing, but Lu said it may be beyond calculation.

However, just because blog software is free and many bloggers are willing to work free for vacations, does not mean there are no real costs associated with new media/social media campaigns. $15,000 to get Christine and staff working for months to conceive and produce this event, attend it, manage the bloggers, build the blog, the Twitter account and other social web assets, etc? Such a deal! Surely HTA does not expect stats with that – though they could have asked and been willing to pay more to get them.

A lot can be measured ex post facto but some of the more critical elements require set-up in advance, not least of which is doing some baseline measurements “in the space” to compare pre and post data. The better social web monitoring services also cost real money, in addition to the time it takes to set them up.

The Hidden Costs of Social Media Campaigns
I am really proud of Christine’s persistence and the state’s willingness to dip their toes in the water. The additional collaborators (hotels, Hawaiian Airlines, Avis & the bloggers) all gave from their pockets to support Hawaii tourism – of which they are a vital part. This was a low-risk venture and hopefully a terrific learning opportunity for people new to social web marketing. This model may not be replicable or scalable though. My concern is that since it was done on the fly (and on the cheap), it may be hard to truly get a sense of what is possible on the social web.

Nonetheless we produced Podcamp Hawaii last year on the fly and on the cheap with outstanding results! (It’s how Christine Lu came to meet Nathan Kam who represents HVCB and David Uchiyama of HTA.) We had over 400 live attendees, thousands more who joined us via live video stream from around the world, and our “tag” – the short label referring to our event (#pch08) – was the #1 trending topic on Twitter for a day (in the world!) and #2 on Flickr (in the world!). We made a huge dent and had people all around the world dreaming about being in Hawaii. We had the support of HVCB, the HCC and many other local businesses. We gave them each a custom landing page on our site – a place to talk directly to our audience – and hundreds of additional blog posts, twitter messages, videos, live stream banner ads, etc.

There is no Podcamp Hawaii 2009 though – despite the hugely positive response. It’s a lot of work for a group of volunteers. I personally logged over 200 hours of my time producing the event – 100% volunteer for this community service. The tools are often free, but the time commitment is substantial with social media.

It is an age old dilemma – people want to try “new” things with very little investment. If it’s successful, it is part luck and part skill. If it’s not, pessimists think they prevail when in fact not enough was invested to make a dent. Remember, blogging has been around for 10 years now; CNN uses the same software Christine used to build the blog; etc. In reality, these are not “new” technologies.

We Are Beginning to Understand the Value of Online Networks
The Harvard Business Review has been covering the social web for years now. I tripped across this article from 2001 (!) today, pointing out the exponential value that is accrued within self-organizing, peer-to-peer online networks. Author David Reed, who called them “GFN’s” for group-forming networks, actually began his research in 1997 and states:

I’ve been studying GFNs for the last four years and have come to realize that they require a whole new way of measuring network value. Indeed, I think companies that can capitalize on the power of GFNs will gain the strongest competitive advantages that the Internet has to offer.

I would encourage companies to realize that the conversational web is here to stay and it can be a very rewarding place to do business. It is a dramatic example of the concept of “the more you give, the more you get.”

Caveat: I know Christine Lu and several of the bloggers personally and have been trying to persuade various tourism entities to learn more about the social web, Here’s just one recent example. The interactive web is not easy to understand from the outside, just like most foreign cultures. In this “place” there are people issues as well as software and technology issues, thus making “understanding” a daunting task to be sure. OTOH (on the other hand) it is a very open, embracing environment though and “newbies” are always welcome!

Want to Learn More?
Our local chapter of the global Social Media Club meets once a month and our meetings are free, open to anyone, and feature informative speakers and excellent networking. Our next event is Friday, June 12th at the ING DIRECT Cafe in Waikiki. Come join us, and learn why the Club’s tagline is, “If you get it, share it.” This month’s topic is “Online Reputation Management.”

Shane and I are also launching KnowHow Café – a place to learn more about the social web, online productivity, audio and video podcasting, blogging, Twitter, and more. Join our email list to be notified of upcoming online and live, in-person classes. Use the promo code “bfs” to help us know where you heard about us. We are mid-way through a six week course called “Getting Started on the Social Web.” I’ll be posting more about that in the coming week, time permitting! Once again, time is a critical resource on the social web.

← Thinking About Having Your Own TV Show?
Join the Email List at Social Media Club Hawaii Chapter →