How do you explain the calm and cooperation that was everywhere in evidence during the wind up to the Hawaii tsunami alert? Social media has earned a spot alongside our government planners and traditional news media. The user-generated messages supported both of those organizations on a second by second basis.

If you think about the mechanics of panic, it largely stems from a lack of information and and abundance of misinformation. When we leave things to people’s imaginations, it tends to bring unfettered “awfulizing” and a survival-based focus on worst case scenarios. Here are several use cases from the past 12 hours here in Hawaii where the free flow of information both locally and globally served to keep both panic and perhaps a tsunami at bay.

Numerous reports coming in from specific locations help people know about road and facility closures. These are instantly made public, and shared via numerous web and traditional media channels. No longer do first responders or reporters have the pressure to be everywhere at all times. It also helps allocate resources and it keeps exponentially more people better informed than traditional media alone. (via @KaimanaPine)

Online communities like Twitter and Facebook serve as extended families – smart and caring to boot! People also share support and help dispel rumors that create anxiety. It’s like the borg on Star Trek – the people are drawn to each other and truly feel the deeper connections we all share in times of crisis. They have the ability to soothe each other and just like the butterfly effect, effect change across wide distances. (Via @jdlasica, @zsazsa, @CelesteAnn)

We received a phone call at 3 am HST from a web colleague, @cdevroe, warning us about the tsunami. Colin is a friend and colleague I met online but 5000 miles and five time zones was no barrier. By 3:20 am I was at the grocery store stocking up and contacting other friends and neighbors. Throughout the morning, I received support and offers of help from all over the world! (Via @cdevroe) 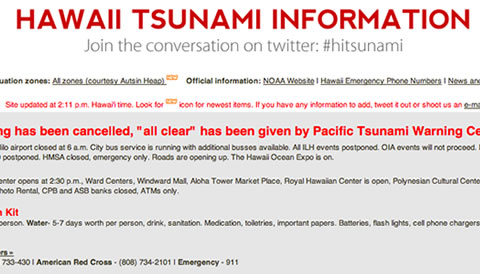 My colleague John Garcia, built a web site in these early hours that became one of the gathering points for updates: hitsunami.info. It hosted important emergency instructions without any clutter or additional clicks buried deep in some traditional web site. He embedded other live media to keep people informed, and was being used by CNN to inform their global television audience. It was named after the hashtag – see next item. (Via @JohnGarcia) 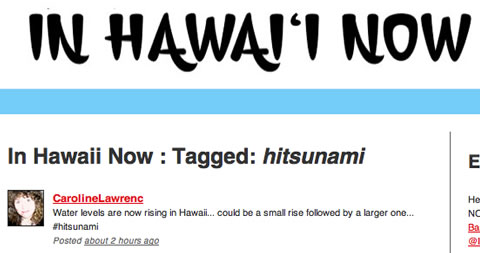 People create hashtags to help aggregate related content from disparate sources so the world (and all of its relevant subsets) can be easily informed. The tag #hitsunami was quickly created and spread among the community, and moved to the top of Twitter trends in a few hours. Hundreds of tweets were created every minute covering every imaginable aspect of the traveling tsunami from the Chile. We built a web site last year to aggregate Hawaii-based Twitter users(InHawaiiNow.com), and quickly added a custom page for the tag so people around the world could follow the tag and the people on the ground all on one site.

Traditional media has a tendency to over-dramatize breaking news. My mom, in Florida, who was watching CNN and Fox News, got easily worked up into a real state of worry. Fortunately, we could video chat throughout the day as I shared with her the actual state of things here. I gave her the legitimate, truthful, complete information, which today was much calmer than the selected worst-case only details. In contrast, our local news worked closely with the Twitter community and provided awesome coverage, include live streaming from various real individuals and web cams. Much mahalo to Joe Moore on KHON Fox, Guy Hagi on Hawaii News Now, and the team on KITV. (Via @shane)

Just like in real life, disasters attract those who want to take advantage of the situation for unscrupulous purposes. However online we have the ability to spread the work immediately, free of charge. Another quality of online communities is the desire to “serve and protect” in a very grassroots way. (Via @Peterliu47)

Social networks are rich resources in uplifting messages, out of the box solutions, and lovely light-hearted ways to wrap up even the most frightening situations. When your “crowd” is large enough, it will be populated by this rich diversity of humanity – researchers, connectors, jokers, technologists, creatives, and those who care, just because that’s who they are. (Via @MarkFromHawaii)

Please share our gratitude to the Pacific Tsunami Warning Center for their intense, accurate, and thorough work on our behalf. Though they predicted likely damage and the possibility of a 6′ tsunami wall, we were spared completely. I personally think our collective hearts and minds influenced the power of the waves while on their way to us. In any case, the PTWC deserves a big mahalo hug from all of us!

I am the epitome of a non self-promoter, which means I forgot to include one of the key elements in this event: #thinkcalmthoughts. I came up with this hashtag to give people in and out of Hawaii something TO DO with their focus and energy. My goal was to soothe people from the inside out, and then ask them to send that soothing energy to the Pacific Ocean. The projections for this big wave to hit us were definitive and extreme. Everyone (except maybe for me) was very surprised when the wave that eventually arrived from Japan was teeny manini. This is a hashtag version of crowd-sourcing, of a lot of distributed people putting their hearts and minds together, and of the power of collective consciousness. I truly believe we have only just begun in this area.

← Nonprofits Getting Started with Social Media
Beware of Social Media: It Does Create Change, Like It or Not →