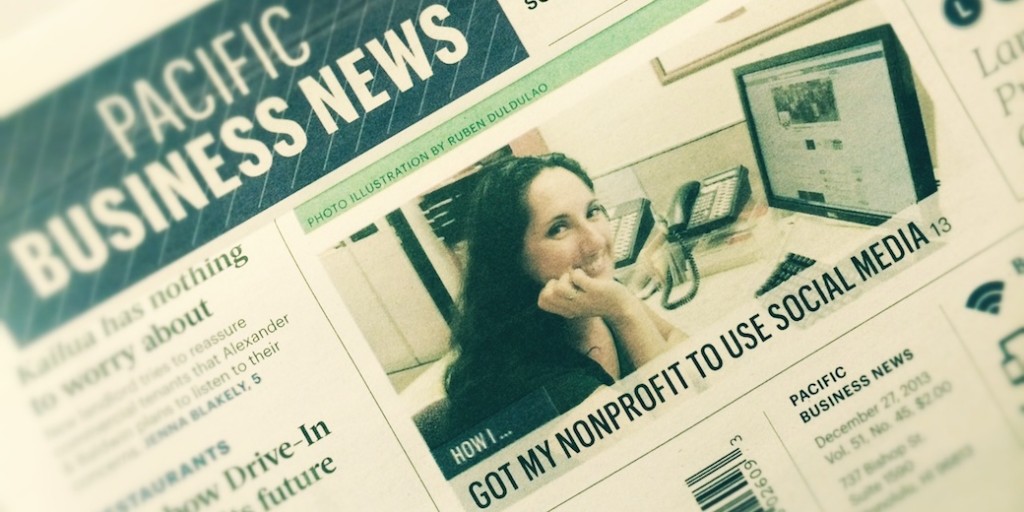 Let me introduce you to my client, HCAP – Honolulu Community Action Program, Inc. They are among the top 10 largest nonprofits in Hawaii, with a wide range of services being provided across Oʻahu. I have been working with them for the past few months as a Social Media Executive-in-Residence. Somewhat surprisingly for an organization of its size, it had managed to avoid having any presence on social media until we started working together last October! On the other hand, it was a brilliant opportunity to start with a very fresh slate and create things, consciously, from the ground up.

HCAP designated an internal group of six who would form the social leadership team. They are a mix of communications, IT, and management – so we have terrific access to a wide range of talent and organizational knowledge. Our scope of work ranges from setting up a presence (and numerous associated tasks) on the leading social networks plus lots of training plus developing a new web site and also a web-based email system. We work in Basecamp, an online project management system we’ve been using for 10 years, combined with weekly Skype video conference calls and a few days a month where I am on-site working in the office and various satellite locations.

It started with #GivingTuesday.

One of the initial goals was to be up and running in time to participate in the 2nd annual #GivingTuesday campaign that takes place the Tuesday after Thanksgiving. It is in the general category of Black Friday, Small Business Saturday, and Cyber Monday – all designed to focus consumer attention in various targeted ways. This was a stretch, especially considering that HCAP is a cautiously-managed nonprofit. Making rash moves was not part of the plan!

On the other hand, having a specific goal and being able to join with thousands of others across the country in a cause much bigger than any of us, was too good an opportunity to miss! We decided to approach Giving Tuesday as a learning opportunity as much as a social media campaign.

What we did not expect was getting front page coverage in the Pacific Business News! In addition to building our strategy for the social campaign, we also wrote a press release and sent over a fact sheet to PBN about #GivingTuesday. We included the other local nonprofits who were participating. Remember, “sharing is caring” is a fundamental element of social media.

This led to HCAP’s Planning and Development Specialist, Tehani Diaz, being interviewed for a piece PBN did on the events. That was great and we were grateful! A few weeks later though, Tehani and HCAP landed on the home page of PBN, in a feature article under the Nonprofit Strategies column. This was powerful exposure in the community, aka earned media, that resulted from social media activity.

Not One, Not Two, But Three

So in less than four full months, HCAP has now been covered three times in Hawaii’s leading business publication. You can see the articles here, though some may require subscriber access:

Thanks to Jenna Blakely for her converage and conversation!

← Roxanne Darling
Join Our List and Increase Your Internet Literacy →